Share your thoughts about the Real L Word and your life. Send us a shout out or share a special story you have about your life and the Real L Word. We would love to hear from you and feature it on the website! 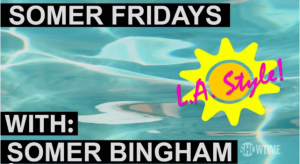 If you don’t already know, Somer Bingham of TRLW Season 3 has web series called SOMER FRIDAYS.  This week’s webisode is hilarious!!!  She gets our favorite married cast members together and plays a quick round of The Newly-Wed Game.  Which couple do you think comes out on top?  Playing are:  Whitney & Sara, Cori & Kacy, and Somer & Donna.  Some of the reveals will surprise you!

Give it a watch and let us know what you think!!